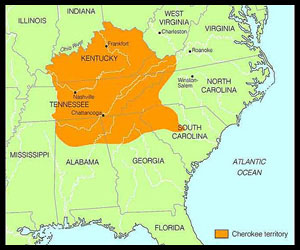 The Cherokee Indians had many Native American villages spread along the Tennessee River which runs through the Appalachian Mountains.  They owned territory that stretched from Virginia and south. The Cherokee Indians built houses and created villages throughout the area. The Cherokee villages were usually spread out miles apart, and to travel from one village to the next was usually a days worth of walking.

The Cherokee Indians homes were mostly crafted out of wood and stone. They were also great farmers and hunters. The Cherokees would grow lush crops in fields and they also harvested nuts and berries which were staples in their diets. They had developed roads along the rivers so they could travel to nearby villages where they could trade and barter. Each village had their own chief who ran the tribe and they were at peace with all of the other nearby tribes, being the other Cherokee villages, the Choctaw, and the Muskogee. There was also many competitions between different Native American tribes back then, and sometimes they would have big celebrations among tribes with fun and games.

Cherokee Indians inhabited these lands for centuries and then as European settlers arrived they started settling the lands and creating their own towns. This is when history began to change for the Cherokee Indians, and not for the good. A well recorded historical fact is about the Trail of Tears. This is when the Cherokees started to be forced out of their homes, sometimes made to leave with out any of their possessions. 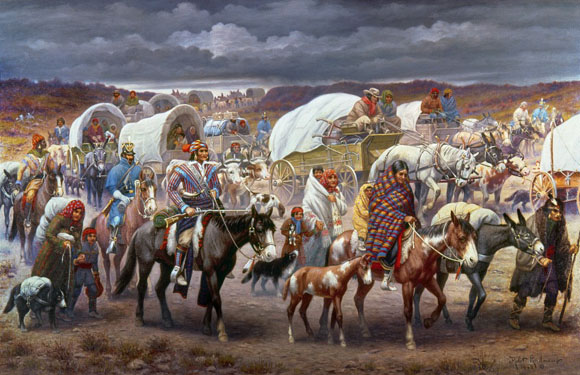 On the Trail of Tears many Native Americans lost their lives on their route to Oklahoma in the winters of 1838-1839. It is said that approximately five thousand Cherokees died out of the eighteen thousand or so that took this eight hundred mile trip. The other nearby tribes previously mentioned were also forced out of their homes. There are over three hundred thousand Cherokees living in the United States now and the United States government has given them their own land that they can govern themselves, by their own laws. The influence of the Cherokee people on our country is of great historical significance and will thrive on for many more centuries.