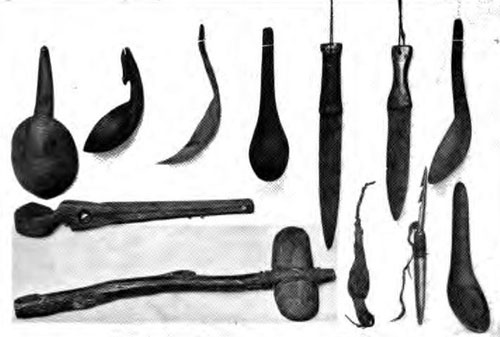 The Native American Indians would also make tomahawks and hammers out of stone and they would craft wooden handles for these tools. Eventually when the Native Americans were introduced to metals through trading their tools and weapons would become much more advanced, but the tools before this were very primitive but at the same time they were also very effective.

Some other kinds of Native American tools were used by the Native American women would use for cooking, things such as a mortar and pestle, which they would use for grinding up things like herbs for medicine or spices and ingredients for their food. Another Native American tool that was pretty neat was the needles they would make out of fish bones so the native Indian women could sew clothing and quilts among many other things. They also had special tools and equipment for weaving and bead making, both of which are still very popular among Native American culture to this day. Since the American Indians were so in tune with nature and did not waste anything they tried to find a use for everything from all their hunts, and many of the Native American tools were even made from these animals’ bones. Many Native American artifacts that have been uncovered over the years are things like the tools and weapons such as arrowheads and tomahawks. Archeologists have also found many other artifacts that they thought were possibly tools, and many of these Indian artifacts can be seen in many museums throughout the United States. There are still many Indian artifacts and tools being uncovered all the time, and the more things that are found just gives more insight into the culture of the Native people.