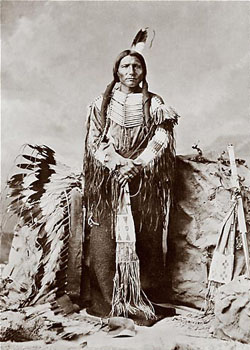 Crazy Horse, also known as Tashunca-uitco is of the most notably famous Native Americans in the Lakota history.  Known for his ferocity in battle and love for his people and traditions, Chief Crazy Horse was a noted warrior even as a young man.  He stole horses from the Crow Indians before entering his teen years and led his first war raid before he had turned twenty years old.

During the war led by the great Oglala chief Red Cloud, Crazy Horse played an important role in destroying the brigade of William Fetterman at Fort Phil Kearny in 1867.  Crazy Horse was very protective of his people and their traditions and would not ever allow anyone to photograph him.  He would also resist all attempts by the War Department to move the Lakota off of their land and onto a reservation.  Crazy Horse retained close ties with the Cheyenne people due to his marriage of a Cheyenne woman and joined forces with the Cheyenne, Hunkpapa, and Sitting Bull to thwart the advances of General Custer and his seventh cavalry in 1876.  Soon after their victory, Sitting Bull and Chief Gall of the Hunkpapa retreated to Canada but Crazy Horse would not retreat and remained to battle General Miles as he relentlessly attacked and pressured the Lakota off of their land from 1876 to 1877.

Crazy Horse fought hard and valiantly, but the constant harassment of the military and the decline in the buffalo population proved two very harsh conditions for the chief to ignore and he finally surrendered in 1877, one of the last famous North American chiefs to yield.  Crazy Horse remained as independent a spirit as he had been before captivity on a reservation and had made one last courageous attempt to do as his spirit guided him to do by leaving his reservation without military authorization to bring his sick wife to her family.  Fearing a plot to begin war, General Crook had Crazy Horse captured and when he resisted, he was killed with a bayonet.