CREDIT: "Early pioneers and trappers, Sacajawea, the bird woman." [between 1800 and 1850?]. History of the American West, 1860-1920: Photographs from the Collection of the Denver Public Library from the Library of Congress. Reproduction Number: X-33784

However these tales of Sacajawea are just that, tales. The true story behind Sacajawea is that her husband was part of the Lewis and Clark expedition and took her along. Sacajawea was born in 1790 in the Shoshone tribe. When she was a young girl she was taken from her family during a raid by the Hidatsa tribe and brought back to their village. Some time had passed when a trapper and fur trader came upon the village and bought Sacajawea from the tribe. He took Sacajawea in as his wife, and at the age of sixteen they joined the expedition, Sacajawea being pregnant at the time. 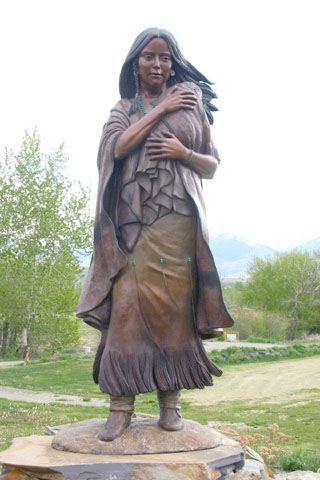 Although the tales of Sacajawea are not true there are some aspects that are, Sacajawea was well known amongst the members of the expedition as being very selfless and helpful, at one point many of the members of the expedition had logged in an entry describing of how her canoe had capsized in the river and with her baby strapped to her back she, thinking fast and not for her own well being, worked to gather all the expeditions books and gear, or as much as she could. This impressed many of the members greatly enough to log it down. None of the items she risked her life to save received any damage, it should also be noted that the items were wrapped to be waterproof yet she still went out of her way to save them. And as for leading the party she on but one occasion offered advice on the best direction.