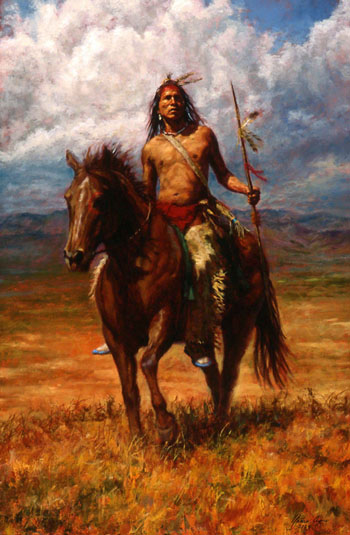 The art of war was a common part of life for ancient Native Americans. Native American warriors were an integral part of every Indian tribe, and were considered brave heroes.

In most tribes Native American warriors were sculpted from birth. In fact, legend has it that after birth a future warrior’s umbilical cord was often buried on the battle field. This would signify that the child was born a warrior, and would dedicate his life to fighting for his people. In fact, some tribes a young Native American was only considered a man once he had made his first killing.

Many ancient Native American warriors wore the skin and hide of animals. This battlefield attire usually included a headpiece that was made from a head of a real animal. This apparel had both practical and spiritual origins. The animal skins would help the warriors hide from their enemies, and Native Americans also felt that it kept them closer to nature. They thought that this would help protect them.

Native American warriors would often use homemade weapons. One of the most common was the spear, which was little more than a sharpened stick, measuring two feet long.

Before going to battle the tribe would usually have a celebration for the Native American warrior. This celebration would consist of dancing, singing, and praying for the safe return of the fighter. At this time the warrior would paint his face with the blood of a sacrificial animal. This was thought to keep the fighter safe during battle.

A similar celebration would be given once the warrior had returned having beaten the enemy. During this celebration, warriors were often presented the feathers from an eagle to acknowledge their accomplishments. These feathers would then be proudly displayed in a headdress. The warrior with the most feathers was usually considered the bravest and most accomplished.