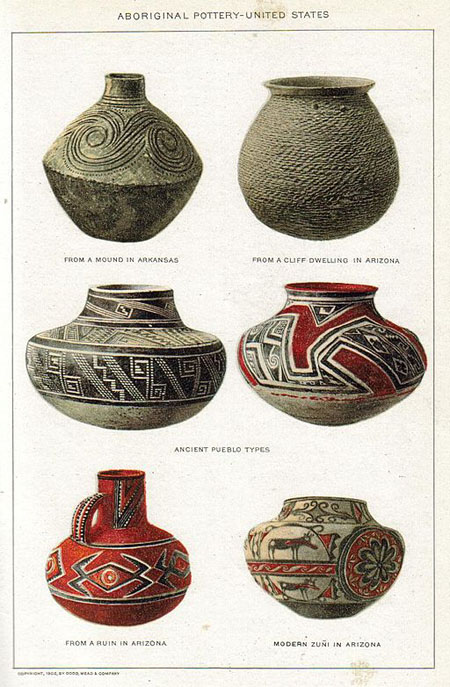 Many historians and archeologists believe that pottery was discovered because ancient people used to line their hand woven baskets with mud-clay. When the baskets were burned so that corn and other food could be dried, the basket would be consumed but the hard clay would still be intact. At first the Native American pottery was made mainly for practical purposes, such as storage, cooking and transport of water, with little thought going into the artistry. The majority of early pottery in Native American culture was not adorned with any decorations and they were not symmetrical. A little later in native history decorative designs began to appear on Native American pottery. Many scholars have tried to find meaning in the artwork but most Native Americans are reluctant to explain their meanings to people outside of their tribesmen. Even if there are any spiritual or traditional meanings to these designs, most people outside of the tribe will probably never know the potter's true intent. Native Americans do not discuss their sacred traditions, or any of there ceremonial rituals and symbols with outsiders. Many of the symbols on Native American artwork come from their environment and things such as nature, animals, humans, and their many gods. This pottery was also used in many different spiritual rituals, which is probably why some of the pieces were decorated with gods and animals they thought to be sacred.