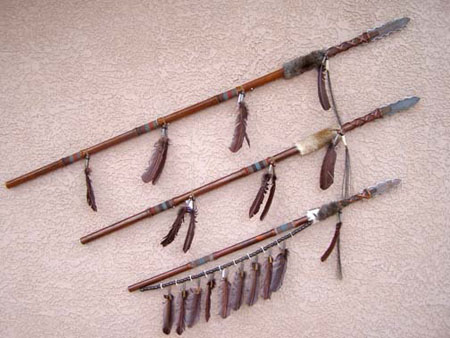 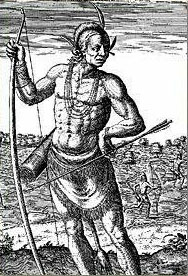 Native American with Bow and Arrow

Another one of the Native American weapons was the tomahawk. A tomahawk head was made of stone and most of the time the tomahawk was used for closed quarters fighting, but sometimes it would also be thrown from horseback. Native American knives were employed in almost the same way as tomahawks and they would also be used for scalping their enemies, which became a trademark for some of the more violent Native American tribes. Another one of the Native American weapons that you might have heard of is the Native American spear, which was used for the same reasons as the other Native weapons but could also be used for fishing. There are some tribes that also used wooden clubs for a weapon of war and these were made in the same way as all the other Indian weapons, by hand and the practice of making weapons was passed on to the tribes through the spirits. These weapons were sometimes decorated with many different colored feathers and even scalps that were taken from victims during times of war. Some of the peaceful Native American tribes used these weapons just for hunting, while others used them for war and in modern times you can see some of these ancient Native weapons on display in many museums around the country.