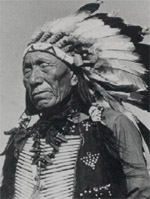 Black Elk became one of the most famous Native Americans through his work as a Wichasha Wakan or medicine man for the Oglala Lakota.  He was the second cousin to Crazy Horse and was a revered Heyoka or sacred clown.  At the age of nine, he experienced a great vision in which he had felt that he was chosen for some special purpose and for years he struggled to learn the meaning of this vision.  At the age of twelve, Black Elk participated in the Battle of Little Big Horn of 1876 and was wounded in the Wounded Knee massacre in 1890.

Black Elk traveled to England in 1887 with Buffalo Bill’s Wild West show, which he described as an unpleasant experience in his autobiography.  In 1894, Black Elk married his first wife who had become Catholic and baptized all three of their children.  After her death in 1903, Black Elk too became Catholic and was baptized Nicholas Black Elk and serving as a catechist.  Black Elk remained the spiritual leader of his people with no contradiction in embracing his tribal traditions of Wakan Tanka, and expressing his faith in the name of Christianity.  He would even use a pipe with rosary beads during his prayer sessions. Black Elk was remarried in 1905 to a widow with two children.  She bore him three more children and they remained married until her death in 1941.

Black Elk had traveled far and wide to preach and to offer prayer and aid to the suffering and spiritually lost souls.  Before his death in 1950, he had told his daughter Lucy that God would show him a sign and that his mercy would shine down upon him and that he was ready to rest.  On the night of his wake, it is told that the Northern Lights could be seen all throughout the night sky in a brilliant display.