The Native American tomahawks were also used just as a tool for many tribes as well and they were also sometimes given as gifts to someone of importance to the tribe during special ceremonies. Many of the tomahawks that were given as gifts, or as a peace offering to another tribal chief, are usually beautifully decorated with different types of feathers and are usually painted in the colors that are representations of their tribal colors. If you look at many old books and old drawings of Native Americans you will see that many of these American Indians are seen with tomahawks and other things common to the Native Americans such as the peace pipe and the bow and arrow. 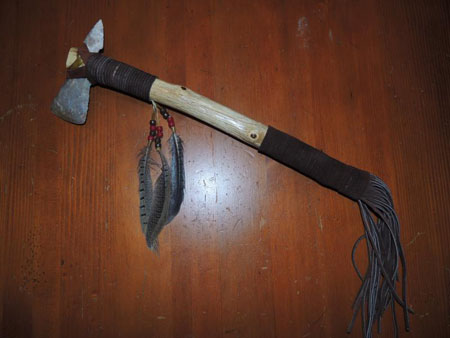 Native American tomahawks have also become a popular collector’s item for many people, much like Native American masks. There are also plenty of authentic Native American tomahawks that can be seen throughout the world in different museums and displays that honor and represent the ancient history of the Native American people. Tomahawks were made out of many different kinds of metal over the years as the Native Americans were introduced to new materials through the settlers and through trade. The art of silversmithing became popular among many of the Native people of the southeast when they learned the art from the Spanish. Once this type of craftsmanship started being used the Native people were able to make better and stronger tomahawks, which lasted a lot longer and were worth a lot more when they sold them to travelers or used them as barter materials. The tomahawk will always be synonymous with war in many people’s eyes, but they were also a symbol of peace among great Indian Chiefs and only the best were fit for a great and powerful Native American Chief.