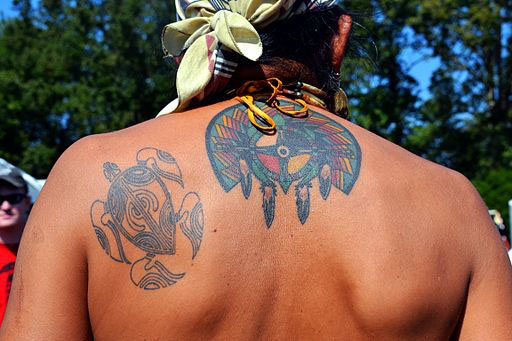 Many tribes have a specific marking or animal that they would have tattooed on them to show pride in their tribe and culture. Many traditional Native tattoos also held mystical and spiritual meanings to the Natives who wore them. Some of the early Native cultures believed that having a specific tattoo could supply them with supernatural powers and strengths. Many Native Americans would tattoo a representation of an animal whose strength they wanted to possess.

Native American tattoos were applied by a Shaman or another designated person within the tribe who was skilled in applying the tattoo with the care for some of the intricacies involved in some Native tattoos. Sometimes having a tattoo was a tribal ritual for some of the different Native American tribes. The tattoos would be done by using sharpened rock or bone to carve the tattoo into the skin and then they would use natural dyes that were usually made from various plants and sometimes even soot to fill the tattoo with color. There are many other beliefs and speculations about the use of Native American tattoos. Some tribal figures will have their whole faces tattooed and among some tribes having permanent tattoos might be symbolic showing that they are believed to have great mystical power. In modern day society Native American tattoos are still very popular and you can see people almost everyday with tattoos of dream catchers, Indian feathers, and even things such as totem poles. There are also many people that still get the traditional tribal tattoos of their tribes to show pride in their line of lineage within their tribal history. There are places where you can still have your tribal tattoo done in the way the Natives did it throughout history and sometimes visiting an Indian reservation you might be able to find someone skilled in old world Native tattooing.