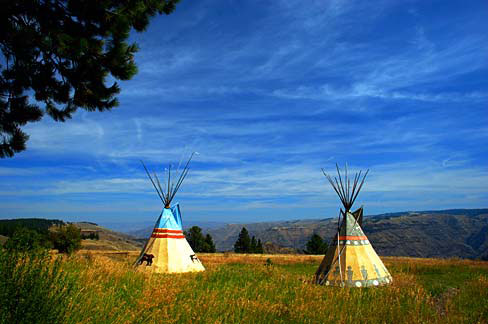 Since many Native American Indians were nomads at one point, and many would travel and move with the buffalo that would serve as a food staple for them, they had to have housing that was easy and quick to move, this is one of the reasons that certain plains tribes created the American Indian teepee. For the times the teepee was an ingenious invention and still to this day when you really analyze how the teepees were constructed, it is still quite amazing for the primitive times.

The Native people made the American Indian teepee out of an armful of small but strong trees all cut to equal lengths. They would tie these together with a rope type material that was made from animal sinew and then they would use an animals hide to cover the hand made frame. A door was also made out of a piece of the hide and there was also and inner layer of animal hide, so both sides of the frame of the American Indian teepee were covered. When finished the teepee was an A-frame structure and the top would have flaps that could be opened or closed to allow smoke to escape. The base was also made wider so there would be plenty of room for the fire.

Fire was another integral part of the Native American Indians lifestyle, so the creation of the American Indian teepee was perfect since it allowed the Indian people the ability to have their own fires to cook with in their homes. The other great thing about the teepees was the fact that they were so mobile, and the nomadic tribes could just take them apart very quickly and move them as they followed the buffalo. Other times the American Indians would have to move their homes quickly to avoid the stampeding buffalo, which would occur frequently since they lived in such a close proximity of the buffalo. The buffalo hide was the main hide that the American Indian teepee would be made from, and many times the tribal families would decorate the outside of their teepees with their family of tribal symbol.