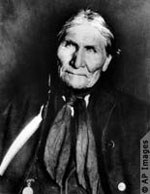 Geronimo, given the birth name Goyathlay (one who yawns), was born in 1829 in Mexican territory where New Mexico now stands.  Born a Bedonkohe Apache, Geronimo became a Net’na during his youth and into his manhood and given the name Geronimo reportedly by the Mexican soldiers.  It is said he was given this name because if his daring feats and raiding successes to powers given to him by supernatural beings, including an alleged invulnerability to bullets.  He was never a chief but he was a medicine man, a seer, and a spiritual and intellectual leader.

Geronimo’s career was most definitely linked to his brother-in-law Juh, a Chirichua chief because Geronimo would often have to accompany Juh and speak for him due to a very severe speech impediment.  Geronimo led the last American Indian fighting force formally to surrender to the United States. He became one of the most famous Native Americans and Apaches because he fought hard in the face of incredible odds and was the last to fall. To the pioneers and settlers of Arizona and New Mexico, he was a bloodthirsty murderer and was feared as much as he was revered for the first half of the century.

Geronimo was aggressive and courageous in the face of adversity, the very pinnacle of the values set forth by the Apache people.  In 1858, Geronimo returned home from a trading excursion and found his wife, his mother and three young children murdered by Spanish troops.  Geronimo became so hateful of the white people that he is said to have vowed to kill as many as possible.  He was said to have gained his “powers” at this point through a vision.  He was able to stave off the U.S. troops until he was tricked by Apaches working for the U.S. and was forced to move to a reservation and in 1886 he had finally surrendered. He died in 1909 as a prisoner of war and was buried at an Apache graveyard in Fort Sill.