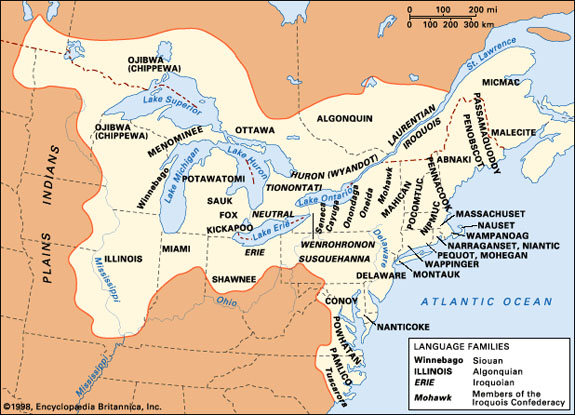 Before the invasion of the Europeans on Indian territories the Eastern Woodland Indians were made up of several different tribes that lived in the northeastern United States. Living in thick wooded areas the Eastern Woodland territory spanned from the Atlantic Ocean to further west than the Great Lakes and from into Canada to as far south as Florida. Although their beliefs, ideas, and ways of thinking were vastly different the Eastern Woodland Indians lived in similar fashions with complex societies that were divided into classes. They were made up of diverse groups of Indians. Some of the tribes that were included in the Eastern Woodlands Indians were the Iroquois Nation and the Algonquin, and later the Muskogean, the Illinois, the Cherokee, and Shawnee, just to name a few.

The Iroquois Nation was made up of five tribes. They were the Iroquois, Senecas, Onondagas, Oneidas, and Mohawk Indians. They were enemies of each other until they became one nation. Algonquian included the Abenaki, Massachusett, Wampanoag, Narragansett, Pequot and Montauk tribes. The Muskogean Nation, also know as the Creek confederacy, was made up of numerous smaller Indian tribes. They came and went from the confederacy as many of them were nomadic tribes. 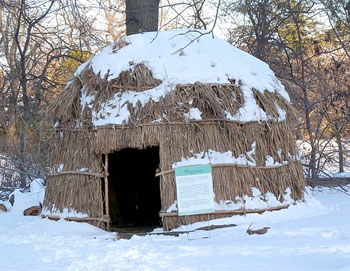 The area they lived on had rich soil, ample rainfall, and thick forests. They lived in villages near streams and lakes. They would grow crops, hunt wildlife, and lived completely off of the land. They lived in wigwams and long houses built from the elements around them. The Eastern Woodland Indians made their clothing from pelts of the animals they hunted for food. The men in the tribes were the hunters, fisherman, and builders, while the women took care of the homes, and the children. Both the men and women took care of the crops, the men usually cultivating and planting while the women harvested.