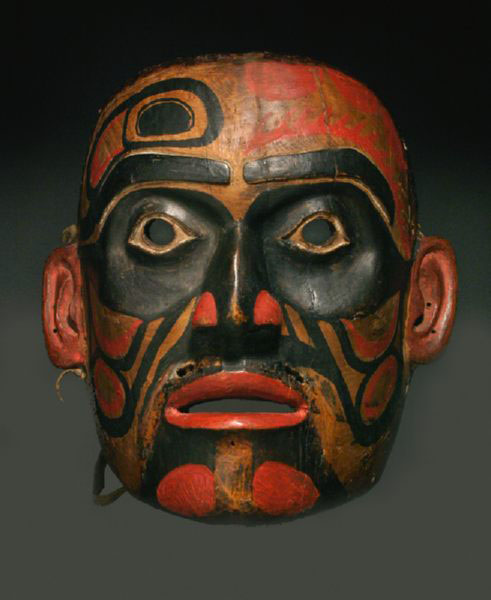 Native American Mask found in 1904 in the Northwest

Native American masks had many different purposes including its medicinal and spiritual uses and sometimes they were just used for entertainment purposes. Many Native American tribes believed that when certain animal masks were worn during specific tribal rituals that the person who wore the mask would take on certain characteristics of the animal depicted, they believed that the spirit of the animal would enter that person while they were in the mask.

These Native American masks, as with most things associated with Native American culture, varied between the hundreds of tribes that once occupied many regions of the Americas and Canada. Many of the masks made by the American Indians represented things like strength and wisdom. At first these native masks were made by using traditional tools made from rock and bone that they used for shaping, gouging and cutting. After the Natives made contact with European voyagers they obtained new tools and they were able to make their masks much easier and with much better precision.

Some Native American masks were made purely for decoration while many others had much deeper meaning in tribal rituals. Some masks were crafted as portrait masks, and they were intended to portray an important figure in Native American culture. Some of these portrait masks were created with a labret, which is a piercing in the lower lip. Traditionally the larger, more beautiful labrets showed a higher social status. Some of these Native American masks were created for the sole purpose of American Indian secret society rituals. These secret societies were sometimes shaman societies, war societies, or societies for inducting young people into the tribe with special conjurations. These secret societies were only for members of the society and no one else was allowed to attend these sacred rituals.

By Leoboudv (Own work) [ GFDL], via Wikimedia Commons

Native American Shamans would practice these special rituals and would wear the Native American masks along with the different animal masks to act different stories, such as stories of creation or war. Some other uses for these masks were for use in what the Native Americans called potlatch ceremonies. Potlatch ceremonies were festivals where the chief of one tribe would give a gift to another tribe’s chief. The tribal chiefs also wanted to give great gifts to show off the tribes’ wealth to the other chief. During these ceremonies both tribes would feast and then a ceremonial dance would take place where dancers would wear these beautiful ceremonial masks and act out stories.

Native American: Through the Eyes of His Mask